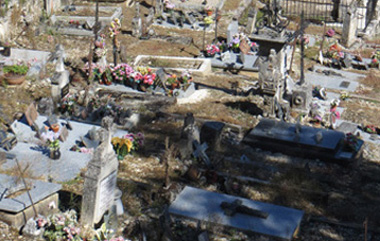 Here I lie close to the grave
Of Old Bill Piersol,
Who grew rich trading with the Indians, and who
Afterwards took the bankrupt law
And emerged from it richer than ever.
Myself grown tired of toil and poverty
And beholding how Old Bill and others grew in wealth,
Robbed a traveler one night near Proctor’s Grove,
Killing him unwittingly while doing so,
For the which I was tried and hanged.
That was my way of going into bankruptcy.
Now we who took the bankrupt law in our respective ways
Sleep peacefully side by side.

I never saw any difference
Between playing cards for money
And selling real estate,
Practicing law, banking, or anything else.
For everything is chance.
Nevertheless
Seest thou a man diligent in business?
He shall stand before Kings!

Rhodes’ slave! Selling shoes and gingham,
Flour and bacon, overalls, clothing, all day long
For fourteen hours a day for three hundred and thirteen days
For more than twenty years,
Saying “Yes’m” and “Yes’, sir” and “Thank you”
A thousand times a day, and all for fifty dollars a month.
Living in this stinking room in the rattle-trap “Commercial.”
And compelled to go to Sunday-school, and to listen
To the Rev. Abner Peet one hundred and four times a year
For more than an hour at a time,
Because Thomas Rhodes ran the church
As well as the store and the bank.
So while I was tying my neck-tie that morning
I suddenly saw myself in the glass:
My hair all gray, my face like a sodden pie.
So I cursed and cursed: You damned old thing!
You cowardly dog! You rotten pauper!
You Rhodes’ slave! Till Roger Baughman
Thought I was having a fight with some one,
And looked through the transom just in time
To see me fall on the flor in a heap
From a broken vein in my head.

All they said was true:
I wrecked my father’s bank with my loans
To dabble in wheat; but this was true –
I was buying wheat for him as well,
Who couldn’t margin the deal in his name
Because of his church relationship.
And while George Reece was serving his term
I chased the will-o’-the-wisp of women,
And the mockery of wine of New York.
It’s deathly to sicken of wine and women
When nothing else is left in life.
But suppose your head is gray, and bowed
On a table covered with acrid stubs
Of cigarettes and empty glasses,
And a knock is heard, and you know it’s the knock
So long drowned out by popping corks
And the pea-cock screams of demireps –
And you look up, and there’s your Theft,
Who waited until your head was gray,
And your heart skipped beats to say to you:
The game is ended. I’ve called for you,
Go out on Broadway and be run over,
They’ll ship you back to Spoon River.

I bought every kind of machine that’s known –
Grinders, shellers, planters, mowers,
Mills and rakes and ploughs and thresher –
And all of them stood in the rain and sun,
Getting rusted, warped and battered,
For I had no sheds to store them in,
And no use for most of them.
And toward the last, when I thought it over,
There by my window, growing clearer
About myself, as my pulse slowed down,
And looked at one of the mills I bought –
Which I didn’t have the slightest need of,
As things turned out, and I never ran –
A fine machine, once brightly varnished,
And eager to do its work,
Now with its paint washed off –
I saw myself as a good machine
That life had never used.